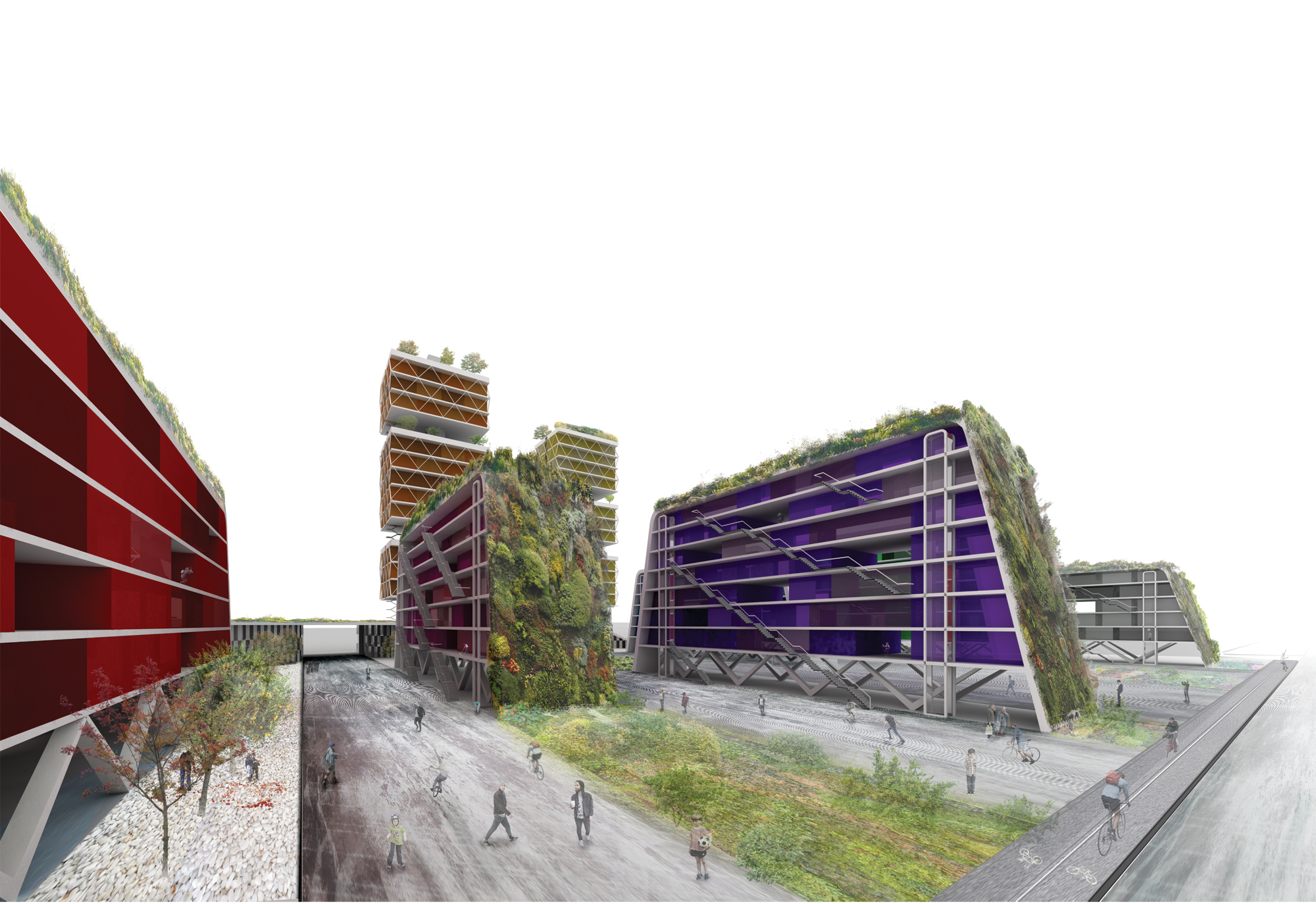 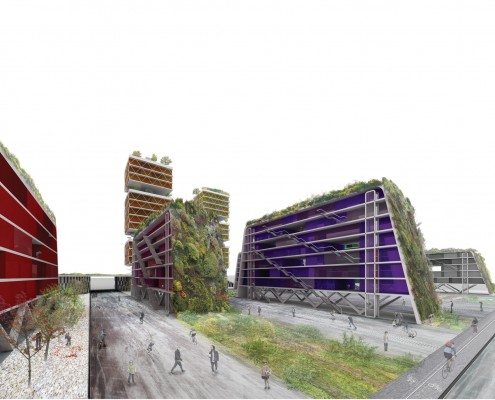 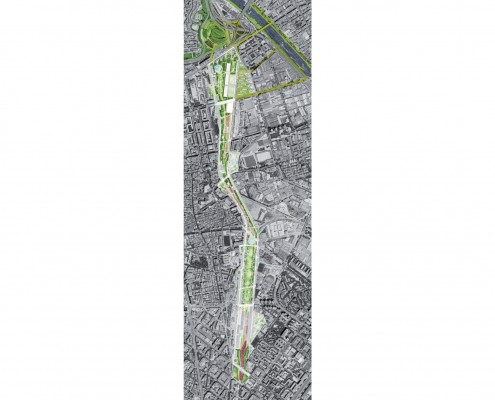 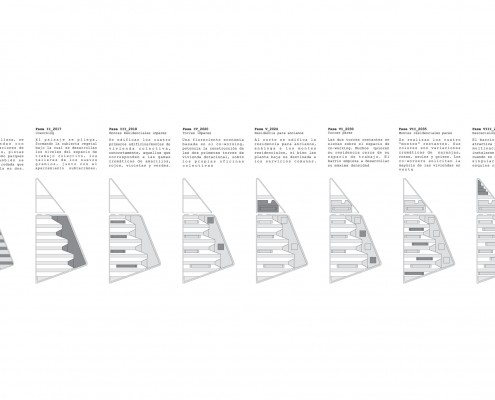 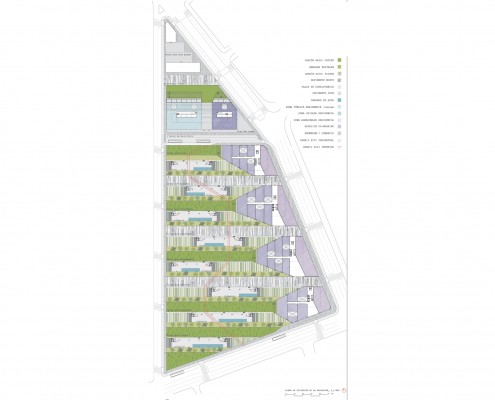 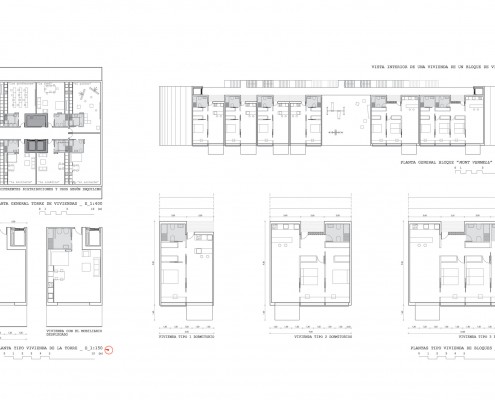 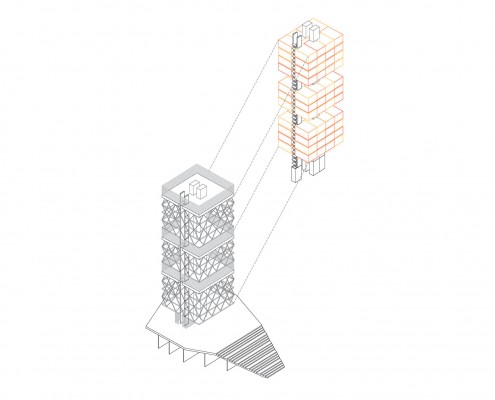 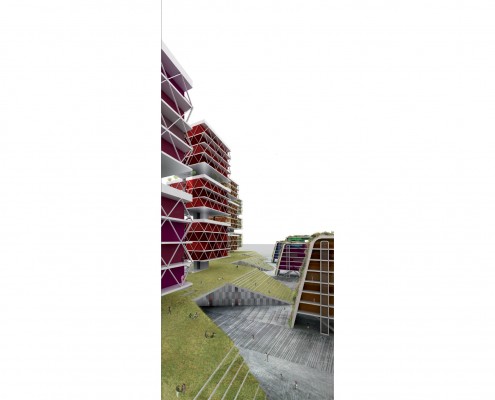 This urban planning proposal reconnects a big area in Barcelona which has been isolated historically by highways and train infrastructures. For this purpose a series of east-west new connections reattach the neighborhood of Sant Andreu, Bon Pastor and Trinitat.
In the north-south axis, the priority is to ensure the continuity of the parks that starting from the Ciutatdela, pass through the Estacio de la Sagrera, and continue in the linear park between Sant Andreu and Bon Pastor, ending in the Trinitat roundabout.
The development proposes programmatic bands east-west oriented, in which cohabit together programs of production, consumption and housing, depending on the predominant uses in the current plot limits. At the east limit, the co-workings and social housing towers face Sant Andreu, then the housing mountains are developed by phases on the west side, facing the park. Vehicular traffic is restricted throughout the area. Pedestrians and cyclists can traverse the ground floors of buildings in multiple paths.
The built-bands arise as a timescape, which begins as a series of gardened strips, from which will emerge on demand the housing mountains, and not vice versa. Although the order and number of phases may vary, depending on the financial capacity of the City and actual demand, there are eight stages programmed from 2015 to 2040. Each building is merged with the existing landscaped, folding from the ground and configuring a mountain inhabited, each with its own color identity.
Once that the Guggenheim effect has been exhausted, and Spain has an excess of landmarks which are difficult to maintain and program, the proposal recover the old middle age “union city” where there was an overlap between the productive, the workshops of artisans, and residential fabric. Barcelona´s street names are still identified with the activities of their unions: Cotoners, Sombrerers, Mirallers, Agullers, Portadors, Esparteria, Mercaders, Corders, Vellers, Brocaters, Escudellers, Calderers, Sabaters…etc.
Thus, the new streets will have the names of the new professions: Programmers, Developers, Consultants, Designers, DJ´s, Curators, Editors, etc. This new Guild City will be developed layered from east to west.