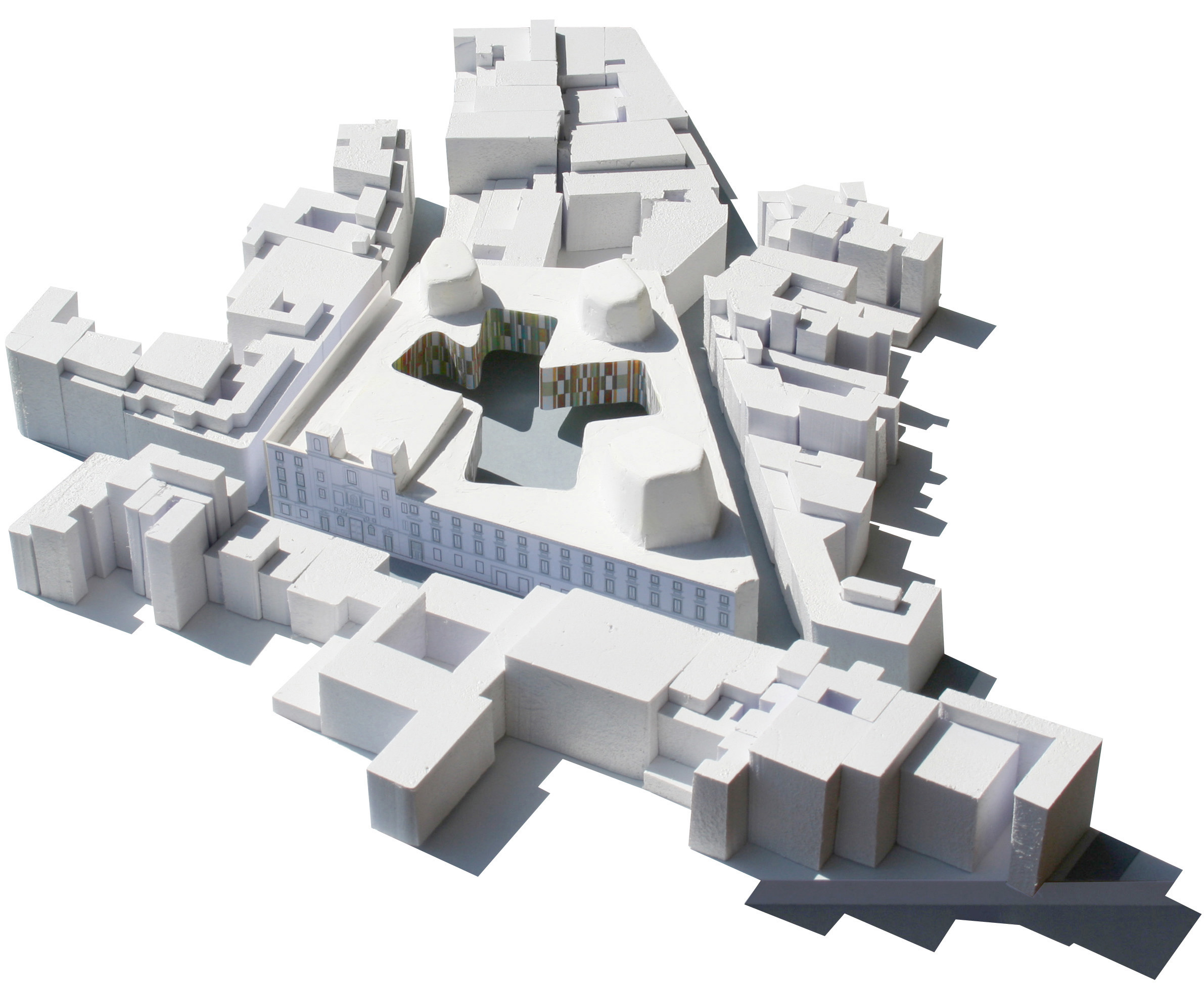 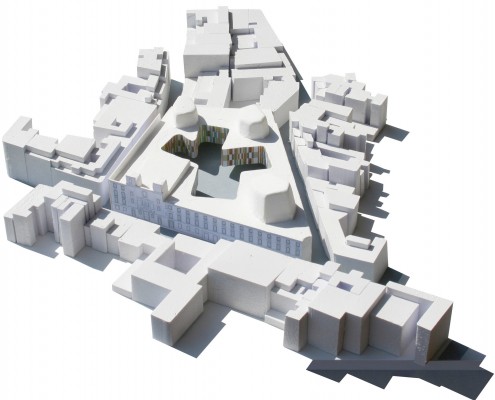 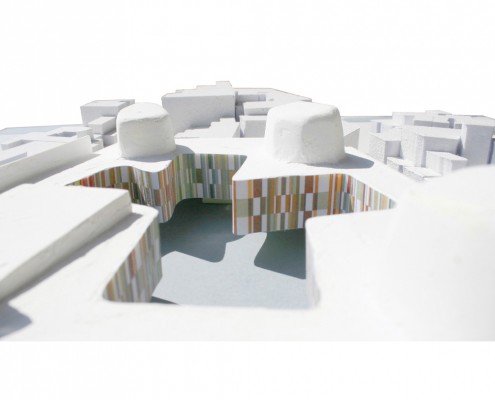 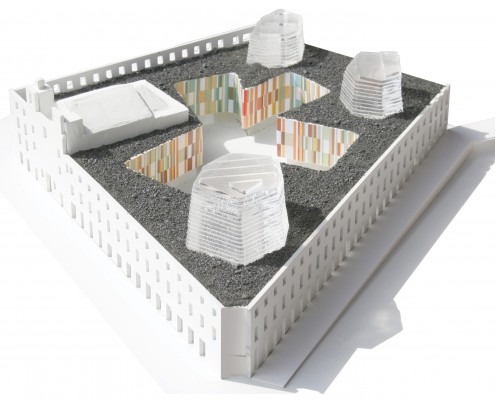 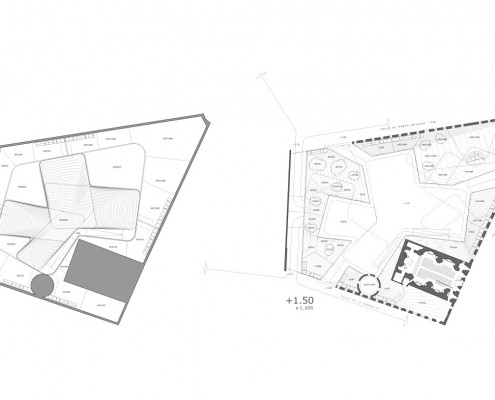 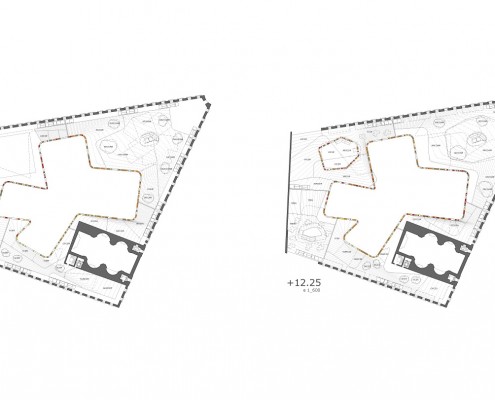 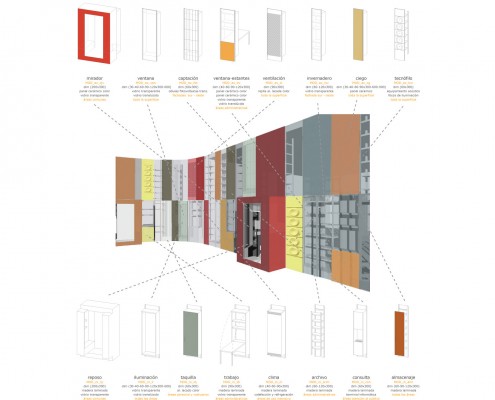 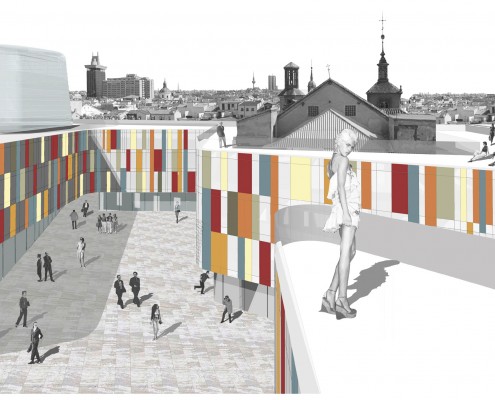 The tendering process required a solution to a complex hybrid program in the “Escuelas Pías” (yo lo dejaría así, pero si lo preferís traducido sería “Pious Schools”) building in Madrid, whose perimeter had to be respected.

Therefore, the starting point for this proposal is the preservation of the “Escuelas Pías” (ídem) and San Antón’s (ídem: Saint Anton’s) Church facades, following a reinterpretation of the idea of the classic patio.

We soon came up with this question: should we repeat the previous structure, where the inside space was fragmented into several patios? Or is it better to unite everything in a single patio?

Between unity and fragmentation, we propose a cross-shaped space that adds and integrates; a space of ambiguous perception but with a precise limit, having multiple scales but a single center.

In baroque architecture there is a huge rift between the internal and the external limits. In the plan of San Antón’s (ídem) Church, Pedro de Ribera starts from a given outer surface and it is in the inside where he makes the limit vibrate. Between them, there is only filling, poché, stone…

This project reinterprets the idea of “poché,” forming an interior that vibrates immersed in a given external limit. Between both limits, there is no longer any inert matter; multiple programs negotiate their position instead, in a continuous succession of balances.

The cross-section clearly shows three different levels. The ground floor, completely open, offers the greatest inside-outside permeability and links the street with the new patio through three wide passages.
The intermediate level, consisting of three floors, holds the bulk of the public and administrative program.
The third level is comprised of three crystalline volumes that emerge from the top like icebergs, restoring a space traditionally taken by power to the city.

Below these three levels, corresponding to the cross-shaped space, we find the auditorium and the exhibition halls, which may be used by the Architects Association as well as by the rest of programs.