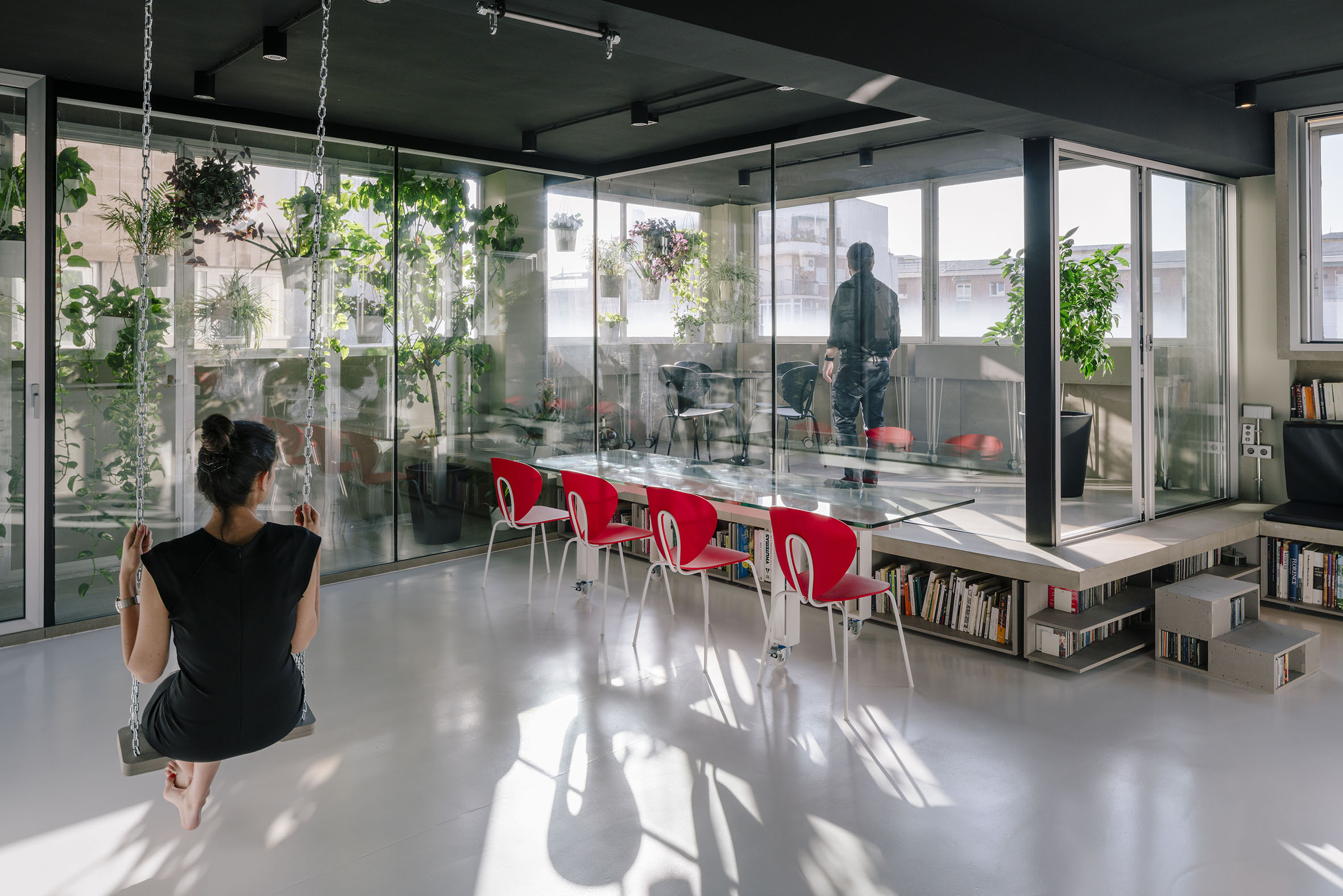 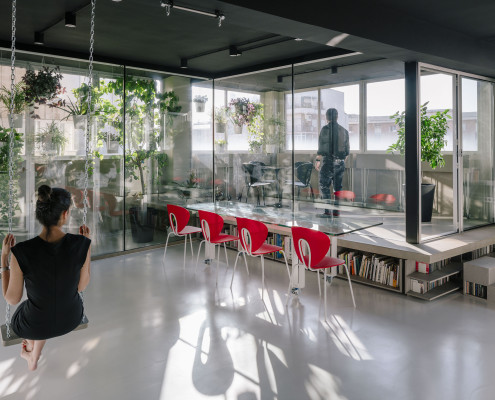 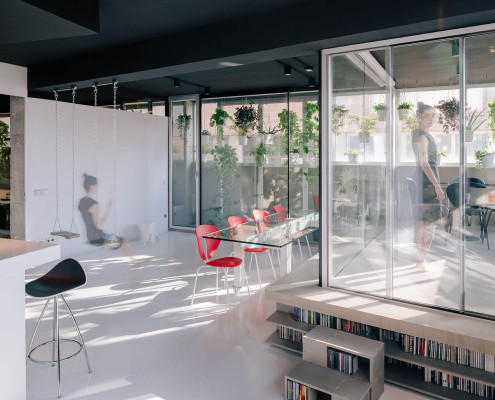 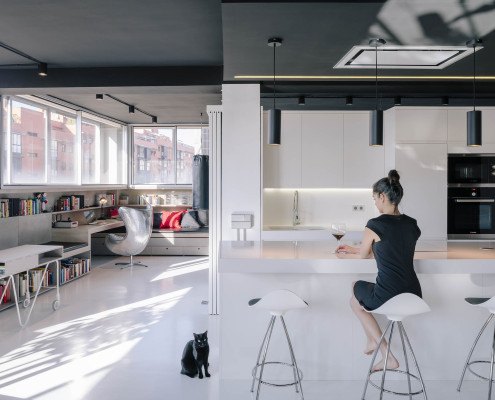 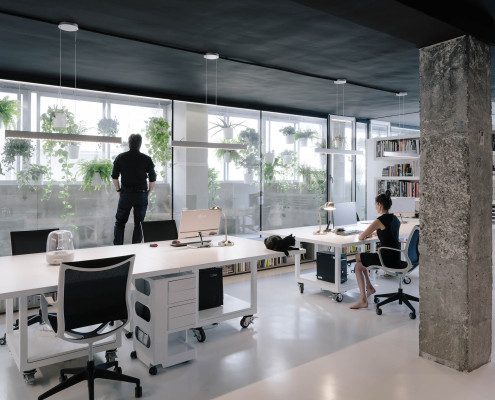 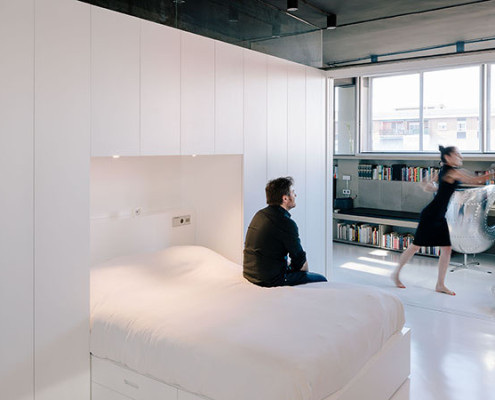 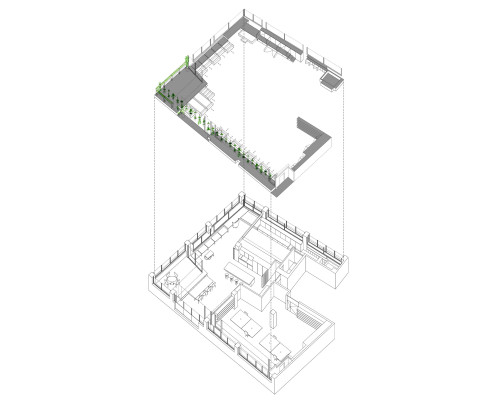 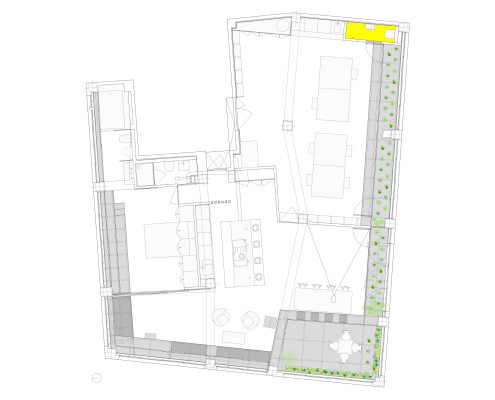 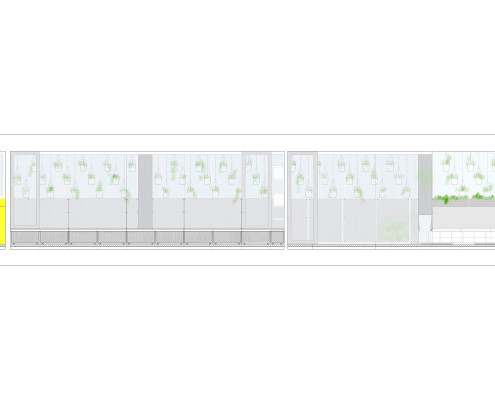 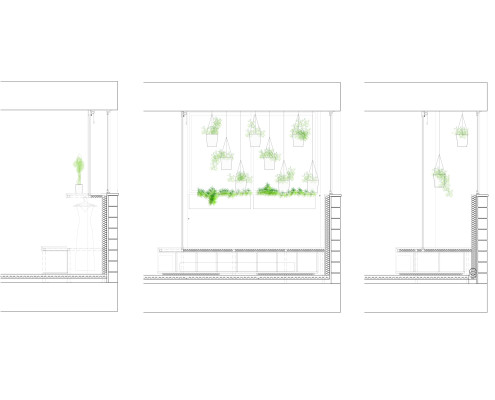 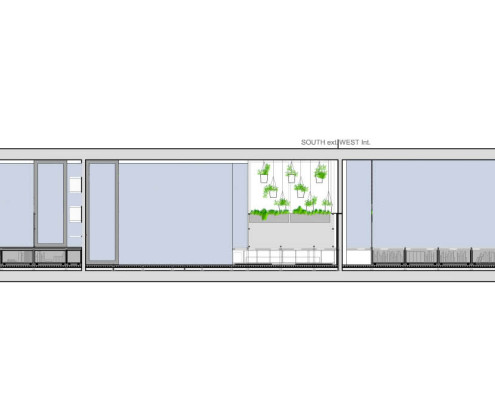 Ctrl + Green is the reconversion of an industrial space into a studio/home in the vicinity of Madrid Río. The architectural strategy is based on duplicating and saving space and/or energy. First, the architectural elements (the floor and the facade) are duplicated, generating active cameras. In second place and thanks to the previous strategy, the project stores energy and a multitude of objects, clearing the view of the magnificent sky of Madrid. The original premises did not have thermal insulation. Its perimeter was glazed in its three orientations, but its carpentry and glass were simple. As a solution, a second glass skin has been created inwards, sufficiently separated from the existing one, to create a walkable gallery that thermally and acoustically insulates. The interstitial space has been resolved with seven different sections along the 40 linear meters of its three facades. The floor has been raised 45cm, allowing its use as a terrace to the outside and as a bench running inwards. Under this perimeter are large drawers with storage wheels. In the south orientation, the gallery is a greenhouse full of hanging plants. In the Southwest corner, it becomes a habitable terrace surrounded by an urban kitchen garden. On the north facade, the space between the skins is reduced, unfolding a divan surrounded by books and cabinets. The prototypes of the large transparent table, the tables for the computers and the auxiliary waitress have also been designed. All of them with wheels allow the space to be reconfigured quickly depending on each need. The placement of a new pavement has allowed placing a radiant floor with a hearth of anhydrite, fed with an aerotermia system. The final white finish emphasizes the abstraction and luminosity of the space. Abstract materials that enhance space and light in a clear and austere manner have been used. The gray color of the wood-cement panels has been used in the construction of the perimeter. For the floor and inner core white paint and the roof, whose facilities are seen in black, as a strategy of camouflage. The hidden complexity is part of our modern life, and this space aims to reflect our need to dispel the visual excesses that surround us.